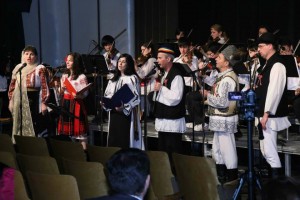 Martisor Multicultural Ensemble is a high school ensemble dedicated to traditional ethnic music. It’s main focus is on Romanian music, but it has and will continue to perform music from other cultures as well, covering the east and south of Europe.
The orchestra was started in 2004, and dance group followed a couple of years later. Instructed by Mr. Damian, the orchestra attracts students from all over the world who find it challenging and fun to perform pieces like “Ciuleandra”, “Barbu lautaru”, “Hora mare bucovineana” etc. On many occasions we were joined by professional musicians like Simion Ciobanu, Kitchener on taragot, Kevin Budd, Toronto and Radu Nechifor, Sibiu on pan flute, Rucsandra Maria Saulean, Toronto, vocal soloist, etc. that enhanced our performances.

Rucsandra Maria Saulean’s music is too complex to define in a single word, as her song writing and interpretive style is eclectic, inspired by the Celtic and Transylvanian folklores, polished with strong soul, blues, gospel and jazz hues.
Born at the heart of the Romanian minority in the pristine mountain town Miercurea-Ciuc, she learned since early childhood how to cherish the cultural values inherited from her Transylvanian and Moldavian parents. Every folk song Rucsandra heard was learned and preserved religiously.
Every piece she writes is inspired by doinas, ballads, carols, church songs, by old folkloric verse and the nation’s greatest poets.
Rucsandra proudly carries her mission to share Romanian culture with the world, and this year she will play with MARTISORUL. 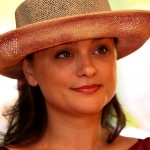 A graduate of the Faculty of Foreign Languages and Literatures from the University of Bucharest, I currently work as Project Manager in the corporate world. Early education guided me towards arts. Besides acting, which I see as a way to investigate the multiple dimensions of the human soul, music is like second nature. I took up guitar out of mere passion for it and I wish I could transfer, somehow, someday, to the public, the vibe I personally feel when holding this instrument.
In spite of previous attempts to join a Romanian musical group here, in Canada, this is the first such experience and I hope the performance will delight the audience who will chose to honour the Festival with their presence.

Come have fun with us!